This web page was produced as an assignment for Genetics 564, an undergraduate capstone course at UW-Madison.

Phylogeny is an area of science that aims to use trees, like the ones seen below, to describe the relationships between different species, taxa, proteins, and genes and predict their evolutionary history. In this example, proteins that are more similar on a molecular level will be grouped together, while those that are less related will be placed further away. These analyses can be conducted in a variety of ways, using different computational methods to reconstruct trees. Depending on the type of tree and the algorithm used, different data can be inferred, such as the rate of synonymous and non-synonymous substitutions, the expected number of substitutions per site, the amount of evolution along the tree branches, and sites of accelerated amino acid change [1].

How are phylogenetic trees constructed?

The construction of a phylogenetic tree is most commonly done using FASTA files of the gene or protein of interest combined with a computational program, such as MEGA [2]. FASTA sequences of data are often gained through the use of Next-generation sequencing, such as Ilumina or Qiagen.  The sequences then must be aligned (using a program such as ClustalW, in this instance) to ensure that the same positions in the protein or gene are being compared to one another. Below, you can see the ClustalW alignment of the FKBP5 gene or gene homolog in a variety of species. Each amino acid is designated with its own single-letter identifier and unique color, making it easy to see conserved sites at a glance.

Following alignment, a computational algorithm is used to determine which sequences are most similar and should thus be clustered together. Different phylogenetic trees are reconstructed using different algorithms, and therefore are not created equally. Some methods are better at handling missing data or gaps in alignment (seen as a white square and a dash in the above picture), while others are better at dealing with large data sets or highly divergent sequences [1].

Minimum evolution phylogenetic trees incorporate a distance method to determine which species are most closely related and use tree length to select the most likely tree. The shortest trees are most likely to bet correct. Distance methods create a matrix determining the distance between every pair of sequences, then use this data to to reconstruct the tree. Minimum evolution trees are useful for analyzing large sets of data with low levels of sequence divergence, much like Neighbor-Joining trees. They are also computationally efficient, even though they have a slower computational speed than Neighbor-Joining [1]. 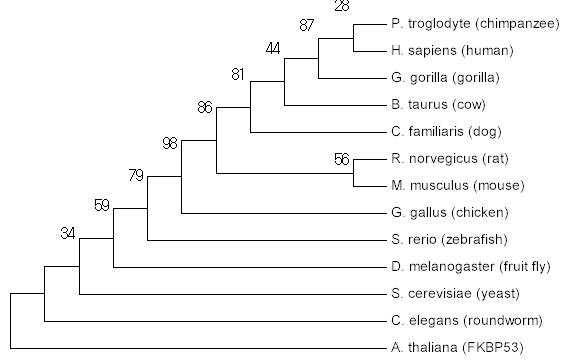 This tree uses Arabadopsis thaliana as an outgroup, indicating that it is the least similar to the other species in the tree. The numbers located at each node are the percentage of times the two taxa were grouped together in a bootstrap test [3].

Neighbor Joining is the most widely used distance method and is highly computationally efficient. Much like Minimum Evolution, it is good for analyzing large, lowly divergent data sets. It applies a cluster algorithm to the distance matrix, much like the one used in Minimum Evolution trees. This cluster algorithm assigns individual sequences into groups, and clusters them based on which individuals are more similar [1]. 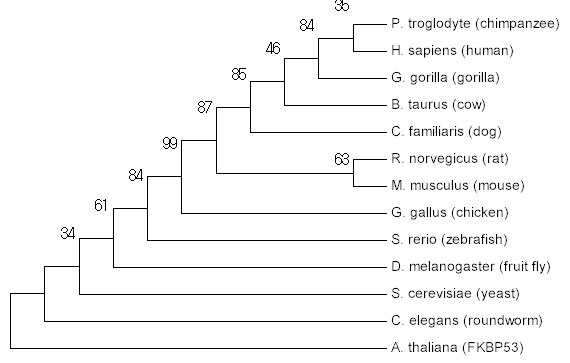 Maximum Likelihood trees are more complex than Neighbor Joining and Minimum evolution, and therefore, have a slower computational speed. This method of reconstructing phylogenetic trees includes a two-step optimization process,in which one optimizes branch length to calculate tree score and one searches for the maximum likelihood tree [1]. This is a more efficient model at recovering the correct tree than the two above methods, likely because it is good at handling missing data. 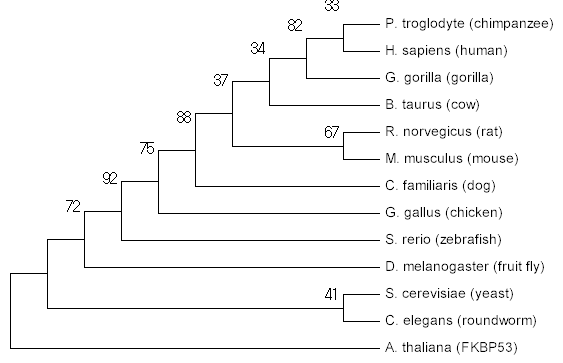 The Maximum likelihood tree, much like the two shown above, also uses Arabadopsis thaliana as an outgroup, but differs on the evolution of the common dog and the rat and mouse clade. The numbers placed near each node indicate what percentage of trees calculated grouped those taxa together. This tree groups Saccharomyces cerevisiae  and Caenorhabditis elegans together in their own clade, indicating that they share a more common FKBP5 gene to each other than to other species shown.

Maximum Parsimony trees are calculated more quickly when compared to Maximum Likelihood, and aims to minimize the number of changes. The most parsimonious tree is shown below. Parsimony is determined through an analysis of character length, which is the minimum number of changes required for that site, and tree score, which is the sum of character length over all sites. There are three types of sites: constant sites, which do not vary at all between sequences and therefore will have the length of zero on any tree; singleton sites, which only vary in one sequence and therefore will always have the length of one; and informative sites, which have two distinct characters observed at least twice. Using these data, Maximum Parsimony produces reasonably results in a computationally efficient manner [1].
​ 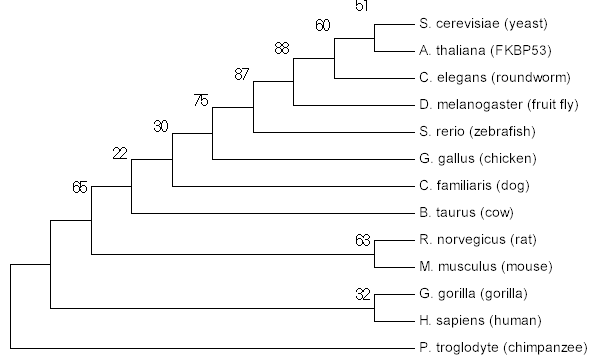 When comparing to the three trees shown above, the Maximum Parsimony tree seems strikingly different at a quick glance. The Maximum Parsimony model differs in that there are no explicit assumptions made during its calculation; that is, any previous knowledge regarding the process of sequence evolution is incorporated into the reconstruction of the tree. It also can be inconsistent, depending on certain model tree combinations [1].

From compiling the data above, it is best to conclude that the Maximum Likelihood tree best organizes this data because of the relatively small sample size (13 sequences of a protein that is roughly 467 amino acids long), gaps in the alignment, and assumption of independent evolution at each site [1]. Because the aim here is to determine sequence divergence and evolution of the human homolog, Maximum Likelihood confers a clear advantage over Neighbor Joining, Minimum Evolution, and Maximum Parsimony methods even though it is computationally demanding [1].
Citations:
[1] Yang, Ziheng and Rannala B. (2012) Molecular phylogenetics: principles and practice. Nature Reviews 13, 303- 314.
[2] Kumar S., Stecher G., and Tamura K. (2015). MEGA7: Molecular Evolutionary Genetics Analysis version 7.0 for bigger datasets.Molecular Biology and Evolution (submitted).
[3] Felsenstein J. (1985). Confidence limits on phylogenies: An approach using the bootstrap. Evolution 39:783-791.

​To download the data set used, click here.
The alignment and all phylogenetic trees on this page were generated using MEGA7 [2]. Amino acid substitutions were analyzed using the Poisson Model.
​
Powered by