This web page was produced as an assignment for Genetics 564, an undergraduate capstone course at UW-Madison.

What are protein domains?

All proteins are made of amino acids. The precise order in which they come has effects on the structure and function a protein has. A set of conserved amino acids contributing to structure and function of a particular protein is called a protein domain[1]. These domains can be used to classify different types of proteins and predict how they may interact with other proteins or engage in different cellular processes.

What protein domains are present in FKBP5?

The FKBP5 protein in humans contains two main protein clans (a way of further breaking down protein domains); FKBP_C and TPR. The FKPB_C domain is a high-affinity binding domain involved in accelerating protein folding, as well as acting as a receptor for immunosuppressive drugs[3]. The TPR domain is a structural motif found in proteins involved in neurogenesis, transcriptional control, and protein folding[4].

​As seen on the protein homology page, there is a high level of sequence identity between the human FKBP5 protein and its homologs. Because the proteins have a high similarity in amino acid sequence and share similar protein domains, they likely act similarly among species. 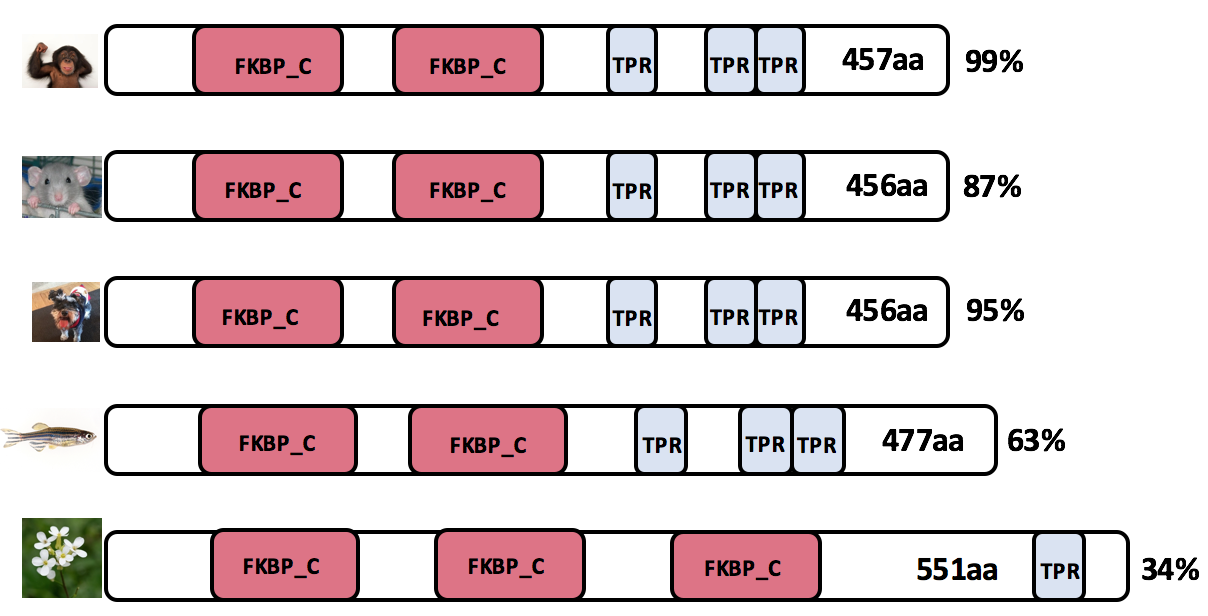 Using the resources InterPro and PFAM, the domains of the protein homologs for chimpanzees, mice, dogs, zebrafish, and mouse-ear cress were found. In all vertebrate species, the FKPB5 protein contained two FKBP_C domains and three TPR domains, while the plant homolog had a three FKBP_C domains. The domains in the homologous vertebrate species were in identical order and spaced relatively similarly, indicating that they likely function in similar ways in all vertebrate organisms shown. Based on which domains are present in this protein, it can be inferred that the FKBP5 protein is involved in binding and protein folding.
[1] http://www.ebi.ac.uk/training/online/course/introduction-protein-classification-ebi/protein-classification/what-are-protein-domains
​[2]http://www.ebi.ac.uk/interpro/sequencesearch/iprscan5-S20170307-232722-0555-8799164-oy
[3]http://www.ebi.ac.uk/interpro/entry/IPR001179
[4]http://pfam.xfam.org/family/PF00515#tabview=tab2
Powered by